Excellent within the group

Our company is an independent part of the HOPPE Group. HOPPE VermögensBetreuung GmbH & Co KG, a wealth management advisor with more than 50 years of experience. Based in the North Rhine-Westphalia town Menden it is also a member of this group. Including its predecessory companies this financial service company that is also authorized according to §32 KWG is specialised in supporting independent entrepreneurs, artists and wealthy private customers. In the past years we received several awards for our excellent service.

After 2012 and 2016 we also received the coveted title "Financial consultant of the year" in 2017. With this we set three new records at one time:

For the first time in this national competition existing for 18 years with more than 400 participants one participant succeeded in defending his title. Peter Hoppe managed it with the highest total score (99,36 of 100 possible scores) that was ever achieved and for the third time after 2012 and 2016 the coveted title was given to the same company.

The competition for the financial consultant of the year starts every June and ends in December. During these 6 months the 400 – 600 participants have to compete in two categories. In the knowledge competition each participant has to answer 40 questions per month regarding in-depth finance matters. The second part, the “depot competition” is about a preferably constant asset multiplication. High fluctuations lead to deductions of points. 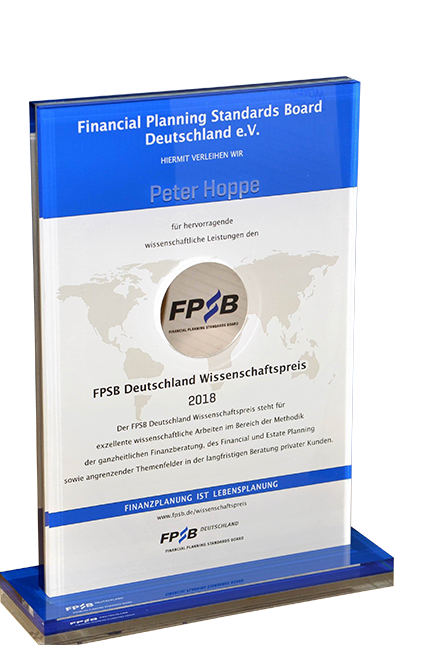 We are very proud that the science award 2018 of the Financial Planning Standards Board Deutschland e.V. (FPSB Germany registered association) was awarded to Peter Hoppe. Peter Hoppe convinced the jury of top-ranking scientists with his scientific work regarding "Rating of the service quality in the financial portfolio management from the private customer's perspective" and was awarded in the FPSB's general assembly in Frankfurt on 8th June 2018.

The jury especially liked that in addition to the theoretical part Hoppe conducted an interview of 200 of his clients and included these results in his essay. It was also honourably mentioned that he excellently implemented the assessment criteria "content of the work", "readability of the work" and "relevance for the financial and real estate planning sector". In the laudation it was said "Hoppe managed to write an essay relevant and valuable for the praxis of the financial and real estate planners that assists the sector to assert itself in apparently overpowering digitalization discussions.”

Germany at its best

Already in 2012 Hoppe VermögensBetreuung was awarded as "Financial consultant of the year" in the context of the campaign "Germany at its best". This best performance was certified by the Ministry of Economy, Energy, Industry, Medium-Sized and Craftwork of North Rhine-Westphalia (NRW).

Thus HOPPE VermögensBetreuung is among these companies that are marketed by the State NRW throughout the nation.